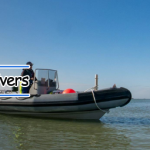 Dive on the Wreck of the Outer/Far Mulberry from Selsey, West Sussex.

We planned this dive as a gentle wreck dive, not too far from the Hertfordshire area specifically, so that we could get some of the more newly qualified divers in for a sea dive. In the event, we got two newly qualified divers, Paul and Russ; two experienced Sports Divers, Matt and Josh and two Instructors, Richard and Clive along on a lovely calm sunny Sunday morning.

We used the Mulberry Divers RIB leaving from Selsey East Beach. Mulberry Divers is a new dive shop in Selsey. Mulberry Divers have a comprehensive list of RIB shuttle trips out of Selsey East Beach skippered by Steve, with space for 10 divers for the short 10-15 minute trip to the Outer Mulberry, just off the coast opposite to Bognor. The only "wrinkle" that needed to be sorted out was that Mulberry Divers wanted to see proof of our dive qualification, something we have not come across with other UK charter boats but which is practice abroad.

Selsey East Beach has plenty of car parking space and cost only £1.60 to park for the day. There is also a toilet and cafe at the end of the car park, so very civilised. We put on our drysuits and met the RIB as it came into the beach/ramp and handed our assembled cylinder/BCD/regs, weights and net bag with fins/mask/hood/gloves in. We jumped aboard and set off, only a 10-15 minute trip to the wreck site. No faffing around, the site was already buoyed so we could just moor up.

The Outer (or Far) Mulberry is a Phoenix unit, a giant re-inforced concrete box planned to be used as part of an artificial harbour in the 1944 invasion on the Normandy Beaches. This particular Phoenix unit never made it across the Channel, they were practicing putting it in position off the UK coast near Pagham and the unit broke it's back in 10m of water. For whatever reason, it never got re-floated so we are left with what is now an artificial reef in an otherwise sandy/pebble sea bed. After WW2, the "wreck" as it became was used for bombing target practice and is partially broken up. There is an Inner/Near Mulberry unit just off the beach at Pagham that is awash at low water so an idea of the Outer/Far Mulberry can be seen from the surface.

Off the RIB in our pairs and down the buoy line following the chain to the wreck at 10m. Going left/clockwise we encountered the intact part of the wreck while going right.anti-clockwise we encountered the broken up and bombed part of the wreck. Circumnavigation in about 45 minutes. Visibility was a moderate 4-5m and we saw a lot of different fish, plant and animal life including; crab, lobster, pollack, various types of wrasse, blenny, dead mans fingers, jewel anemones, etc. For the first time outside of the Mediterranean, we came across some sea hares and in one overhead area, a large Ross (hard) coral specimen, larger than a football, the biggest I've seen.

Back up the buoy line and onto the RIB - a bit of a puff climbing up the spine ladder in full kit but everyone helping out to stow the kit by the central cylinder rack. Fortunately, a quick journey back to dump off the kit at the slipway.

We only did the one morning dive but we could easily have taken the afternoon RIB shuttle to another site such as the Mixon Hole, UB1195 or War Helmet wrecks or looked round the West Sussex area. We got some drink & food and got away early and apart from a bit of traffic on the M25 had a good return journey.
Everyone agreed it was a good day's diving, very easy and what we saw very interesting - back home now to look up the fish/plant/animal guides to see what we saw!