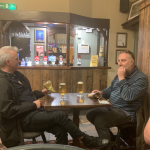 We got the call on the Thursday night to say the trip was going ahead. The UK had seen very wet and windy weather conditions in the wake of storm Alex, so we thought there was a high chance the skipper would call it off. Now it was on and I think we were all anticipating bad viz and potentially some diving in the sheltered areas around Plymouth.


Most of the group drove down on Friday during the day and had a good run with very little traffic. We arrived at the B&B and settled into the pub very nicely. We got a call from Simon to say he was going to arrive around 8:30pm, so we went ahead and ordered our food, as they were going to stop serving at that time. I think we all had a nice meal, all except Simon and Steve. After being turned away from the restaurant at 8:29, they joined us in the bar and had to settle for crisps and a pint for dinner!


The next morning we were all up for an early breakfast so we could make it to the boat for ropes off at 8:30. Boat loaded, drysuits on, quick safety speech from the skipper and we were off, headed for HMS Sylla.


As we descended the shot line, I was really hoping we would see the wreck before we were smack on top of it. We were in luck, the viz was great! We were in for a real treat, I got the GoPro running and off we went. There were lots of openings around the wreck to peek into and lots of marine life on and around the wreck. A great first dive and as we surfaced, I couldn't wait for the second dive. I approached the lift and got positioned. Nothing happened. Skipper and his deckhand are looking puzzled. Buttons are being pressed and the mechanics visually inspected. Eventually, it works in stops and starts until it was almost level with the deck and I got back onboard. There was then a struggle to get the remaining 5 divers back onboard. The next problem we had was as we tried to recover the shot line, it appeared to be caught on the wreck and would not come loose. After a lot of attempts we finally gave up and took shelter so Skipper could take a look at the lift. The plan was to go back and dive the Sylla again but the wind was picking up and the boat was rocking about a lot. We decided to make the second dive in a calmer spot, so decided a drift dive was the best option.