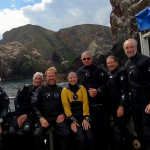 MHD teamed up with two other BSAC clubs on a trip to the North East Coast for two days diving the Farne Islands followed by two days in St Abbs.

We couldn't have asked for better weather and the viz was really great too, easily 5-10m. There was plenty of wildlife to see, and the seals were there as usual, swimming nearby and nibbling at our fins.
We stayed right on the harbour in St Abbs, which meant only a short walk to the boat in the morning. We were taken for a dive then returned to shore for a break on dry land before the second dive. This made a nice change from bobbing around for an hour and a half.

St Abbs was mostly scenic diving, lots of lobsters, crabs and on one dive, the seabed was literally covered in brittle stars. The wolf fish we were told about during the brief were not found, but one of the divers captured some great footage of a lobster chasing a crab.
On the last day, we dived the Glanmire wreck, which lies at 30m. It is covered in deadman’s fingers and there were big shoals of fish near the boilers.
Please check our Photo Gallery for more great pictures from the trip!