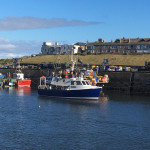 We were seven divers Sue, Alan, Clive, Trevor, Peter L Mid Herts, Angie, Ray from
Stevenage SAA and one none diver Sue my wife. On Saturday Lee the dive skipper rang me
to say that Monday was ok but storm Frances was on its way and Tuesday and Wednesday
may not be possible to dive. A quick ring round and the decision was to go. We all arrived
safely by late Sunday afternoon by early evening we all gathered around the BBQ’s which
had been suggested by Trevor. A very pleasant evening was had by all.


Monday morning meeting time was 0830hrs in Seahouses at the end of the harbour, it was
high water so not so many steps to the boat. We had all read the risk assessment so with
hands sanitized and masks on, we loaded the boat. Plenty of room on the boat to social
distance, the weather was fine and the sea was calm but the North Sea is never warm, just
13 degrees.

Our first dive was the Little Harcar this is not one of the best dive sites, visibility not good
and the seals were definitely socially distancing! The second dive was Gun Rocks, a very nice
pretty and scenic dive with the drop-off, the boulders were covered in white, yellow and a
dull orange carpet of Deadman’s Fingers. Marine life of lobsters, crabs, wrasse but no seals
under the water coming to investigate us humans with our cylinders, bubbles and coloured
fins to chew.

Later that day Lee told us that there will be no more diving this time for us as storm
Frances would be here by morning. That evening we had booked a table at the Craster Arms
for a meal, which the government partly paid the bill, a good evening was had by all.
Tuesday morning the storm had arrived, strong winds and heavy rain. Well the weather is
beyond our control and six of us decided to go home early, Lee only charged for the
accommodation and diving which we had had.

Sue and I decided to stay, so on Tuesday went to St Abbs, sat in the car with the engine
running, blower de-misting the windscreen, wipers working so we could see the rough sea’s
at St Abbs while eating our picnic lunch. No shore diving today!!!
We all arrived home safely and no problems while we were diving.