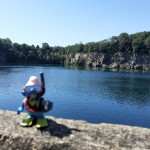 Diving at Stoney Cove resumes with a purpose

Since lockdown has been eased, Mid Herts Divers has taken the opportunity to resume diving at Stoney Cove, starting with some warmup dives, dipping down to the 35m Hydrobox and last week, completing the practical parts of the Wreck Appreciation SDC on the wreck of the Stanegarth.

Trevor has posted some good video footage on the club Facebook page of what it looks like underwater after 3 months without any divers to aerate the water. Visibility has deteriorated a bit with a lot of algal/weed growth which has seen the Nautilus and Viscount cockpit on the 7m shelf draped in weed and due to poor light penetration, water temperatures unseasonably cold. After a month with divers back in the water, water temperatures have improved but still a chilly 6-7 degrees at the 35m Hydrobox.
During lockdown, Mid Herts Divers started on the theory sessions via Zoom for the Wreck Appreciation Skills Development Course, SDC. Once re-opened, we held the open water practical part at Stoney Cove, diving on the wreck of the Stanegarth. The first dive was an orientation to get an appreciation of the overall size and layout of the wreck both by a circumnavigation and wreck penetration. Having got all of this in mind, the second dive was to take detailed measurements of the wreck and to re-check any detail from the first dive. The final session was to translate the dive notes into a detailed sketch. Here are a few words from Russ, who completed the practical sessions of the wreck appreciation SDC:
“It had been a while since doing the theory sessions via Zoom but Clive clearly explained the requirements and we went over the plan for both dives. There was a fair bit to remember, once we had navigated to the Stanegarth, we were to circumnavigate while I took notes of the different parts of the wreck, the various depths including the deck, handrail and wheelhouse, hull construction, details of the propeller and rudder and not forgetting any marine life that was present on, in and around the vessel. We kitted up and I jotted down a few things to take note of on the underwater notepad.
We went in from the bus stop and as agreed during the brief, we made a negative entry straight down and we met at the bottom. Once we had signalled OK, we descended the gulley, found the anchor chain and followed it to the Stanegarth. Upon arrival, I read the depth on my computer, then fumbled around with the underwater notepad, dropping the tiny pencil (thanks for retrieving Clive) then tried to separate the pages that had stuck together with my 5mm gloves on. I wrote down my first measurement, making a guess that it was next to the heading ‘seabed’ which I had previously written but could barely be seen.
We continued around the wreck and I made various notes, knowing I had to make a sketch later. I thought a camera would have been useful at this point to save me having to rely on my ever-worsening memory. Surprisingly to me, the wreck penetration was my favourite part of the dive. Squeezing through holes that barely looked big enough and into darkness was slightly unnerving but exciting at the same time.
The wreck appreciation SDC was a great way to get a better understanding of what to look out for when diving wrecks in future. I also feel confident I can now spot potential hazards and navigate a wreck safely.”
Apart from algal/weed growth and cooler temperature, diving arrangements at Stoney have changed a bit. Maximum divers per day of 45 means that you have to book a space, normally fully booked 2 weeks in advance. Car parking in the quayside car park with every other parking slot coned off to promote social distancing. Shop and changing rooms are shut but toilets, air fills available and the food hatch open for hot drinks and hot food.