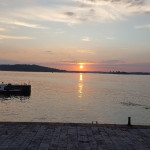 Ten intrepid divers from MHD set off on a beautiful sunny Friday looking forward to a fantastic weekend of diving with Discovery Divers. A (very large) number of hours later they arrived in Plymouth and headed for the pub.
The next day saw the sun rise on a flat calm sea and the prospect of a great day’s dive. First up was the Scylla, a dive last done by MHD in 2014. On arriving at the site the skipper was concerned that there might be a fishing net over the wreck, so only one thing for it, throw Marcus and Simon in and see what happens! Fortunately, after a good 10 minutes they surfaced to say the wreck was fine with no sign of entanglement hazards. So we all leapt in. This turned out to be an amazing dive. The wreck has developed into a massive cold water reef with varying life all over it and is very atmospheric around the bridge. Vis was amazing, at around 10 metres, and we all exited feeling very happy about a great dive.
During the surface interval some minor issues with the boat were seen to and we all kitted up for a second dive, this time on the adjacent James Egan Layne. Just as we all ran through final buddy checks and prepared to jump in the skipper called a halt! The engine was overheating and he did not want to put us in whilst there might be any problems. The decision was made to head back for harbour. However, as we chugged along the engine problems worsened and in the end we found ourselves becalmed. Still, there were worse places to be bobbing around, with lots of boat traffic around and an enormous warship coming in for British Armed forces day. After a spot of sun bathing we acquired a tow and made our way into harbour.
Not to be defeated we kitted up for a dive in the harbour. This was a shallow dive out into the bay. Great vis meant there was lots of time to look at the varied life in the shallows, although some currents further out led to some interesting experiences, including a lost fin and some tangled DSMBs.
That evening we had a great meal in the Clovelly Arms and discussed the day’s adventures, as well as whether we might get any diving in the next day.
Unfortunately, on our return to the centre it became clear the boat could not run the next day and so we reverted to our Plan B. The next day we drove up to Vobster and explored their inland site. This proved to be an interesting (albeit cold!) dive and MHD could well return on another date to see what more we can find.
A great weekend and some great diving. A lesson learned in making the best of everything. And huge thanks to Discovery Divers who were incredibly accommodating and in no way at fault for the boat problems. We will be back!