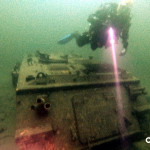 Planned diving at Stoney didn't look very good, with rain, traffic jams on the M1, diversions near Lutterworth taking us 45-50 minutes longer than normal to get there from Hertfordshire. When we got there, the car park was suspiciously empty even for a mid week day with only one other pair of divers parked up.

There were about 10-12 open water swimmers down by the quayside, so Trevor and I decided that if these brave souls could brave the rain and cold in their swim suits then we could do so in our O-Three drysuits!

First good thing was that we could park in the nearest parking space to the bus-stop, usually occupied by the dive schools. We both decided not to get wet in the rain changing so got used the centrally heated changing rooms, probably the first time that either of us has done so since our wet-suit days some 30 years ago.

We had been tipped off that the water at Arlesey a couple of days previously was 7 degrees so with this in mind, we were prepared. Into the water we went and yes, the water was 7 degrees but what we were not prepared for was the visibility. A month almost to the day earlier, we had dived in Stoney and the visibility was awful, 2m or so but today, it was a really clear 8m plus as shown on this screen shot from Trevor's Go Pro on the APC at 21m.

We did a wreck tour from the bus-stop to the Viscount cockpit, down the cliff to the anchor line, along to the Stanegarth and through the hold from the bow to mid-ships. Looking back at the surface from half-way down the 7m/21m cliff we could see both the Viscount and surface clearly, hopefully Trevor has a photo that does justice to what we could see with the naked eye.

Lots of small fish in the hold of the Stanegarth (perch?), only 4 or 5 cm long - lets hope that they survive to maturity.

From the back of the Stanegarth, we couldn't quite see the tug Defiant but soon found it. Then from the Defiant bow, we saw the white Transit type van and the Belinda. From the Belinda, we could just see the APC and the cliffs round by the Gresham. Navigation was easy!

Back to the Belinda and then striking off northwards to the Wessex helicopter and up the cliffs to decompress on the 7m shelf by the Viscount and out by the spine ladder.

Yes, our hands and fingers were getting cold by this point but well worthwhile. Back out to the drizzle and a quick change in the toasty warm changing rooms and to stow our diving gear away. Apart from the usual 50mph slow drive along a large length of the M1, no problems on our return including refilling our cylinders ready for the next time.

In summary, apart from poor conditions top side, really worthwhile going mid week if you can. Trevor and I both agreed that having dived Stoney for more than 40 years now, this was probably one of the best dives that we had there due to the good visibility, so it is always helpful to look out for the visibility reports before you go whether inland or on the coast.