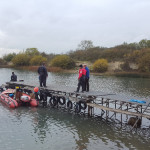 Following on from the very successful August Bank Holiday BBQ and installation of 6m platform, members of Mid Herts Divers took some time out to lay line from the new 6m platform, the 9m platform to the well head by the huts. This new bright blue polypropylene rope replaced the old orange rope between these points that had been down probably 25 years. We then continued with the new rope from the well head towards the bogies so that navigation along the "gully" between well head and bogies is made easier.

To help with the day, we had the use of a rigid hulled inflatable RIB from which we started a sonar survey of the lake. Watch this space!

A good time was had by all.

Post-script; the 6m platform was successfully used the following week by Mid Herts Divers for some rescue skills training and found to be a "good size and very robust". Roped Diver operations are planned to be practiced at Arlesey in the next month, you never know if we will get a cold snap sufficient to allow us to dive under ice this winter when these skills will be needed! cm